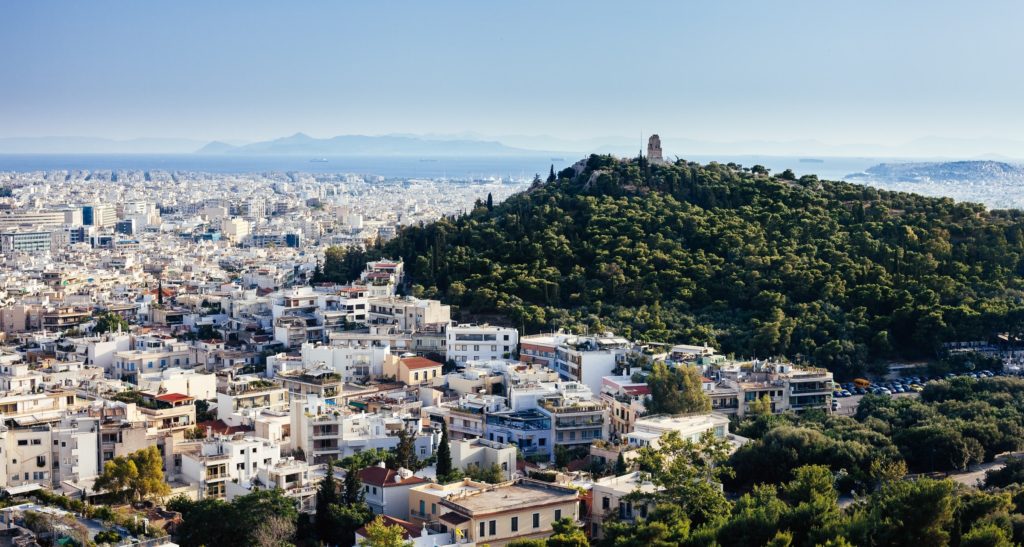 This article by Andrew Dunne was originally published in Horizon, the EU Research and Innovation magazine.

In Greece’s capital Athens, an ancient aqueduct could get a new lease of life as Europe steps up efforts to cope with global warming. The city plans to use a water channel built on the orders of Roman Emperor Hadrian in the second century AD to irrigate modern-day green spaces, which are being expanded to limit the impact of sweltering temperatures. The channel ran 20 kilometres underground transporting water from the foot of Mount Parnitha in northern Athens to near the centre.

The possible revival is part of a push across the European Union to come up with distinct local answers to an increasingly common worldwide challenge: how best to adapt to the inevitable consequences of climate change

‘Athens has very little green space and this has a huge impact on our high temperatures,’ said Professor Chrysi Laspidou, who leads the EU-funded ARSINOE project on climate adaptation. ‘On a small scale, we are trying to show what might be possible by giving people a different vision.’

As global warming intensifies, learning how to adapt to extreme weather events – including more severe heatwaves – is gaining urgency in parallel with cutting emissions that are exacerbating the climate crisis. Adaptation featured high on the agenda of this year’s COP27, the United Nations climate change summit that took place in November in Sharm El-Sheikh, Egypt.

Against that backdrop, this has been a year like no other. Global weather reports have been dominated by floods, storms, droughts and wildfires. In Europe, Germany was battered by hail in June and the continent as a whole then had its hottest summer on record.

Working with areas across Europe that are vulnerable to climate change, we are developing innovative ideas about how they might respond.

In a sign of growing attention to the challenges of adjusting to global warming, the European Commission has launched the ‘Mission on Adaptation to Climate Change‘ to support at least 150 regions and local authorities to become ready to face climate disruptions by 2030. ARSINOE is part of this initiative.

ARSINOE’s focus is far wider than Athens, bringing together 41 partners made up of industries, universities and local authorities from across Europe and beyond. From Denmark in the north to the Canary Islands in the south and the Black Sea in the east, the project is developing ‘living labs’ to tackle local and regional climate challenges.

‘Working with areas across Europe that are vulnerable to climate change, we are developing innovative ideas about how they might respond,’ said Laspidou, a professor at the University of Thessaly in Greece. ‘We aren’t coming in with solutions – these are decided upon through stakeholder engagement.’

One distinctive feature of the project is its use of an online marketplace known as the ‘Climate Innovation Window’. Still in development, this portal allows local people to list the climate challenges they face – from coastal floods to wildfires – and be matched with innovative solutions being tested in the field.

A separate EU-funded initiative that is advancing Mission Adaptation’s goals is IMPETUS. It combines Earth observation satellite information about climate change with on-the-ground data about affected communities. The project involves residents in weighing up the best responses to a given challenge.

‘We are connecting diverse data and human activities in new ways to implement climate adaptation measures at a local level, which we can then scale up and modify for different regional contexts,’ said Hannah Arpke, the project coordinator and a specialist in science management and rural development at the Eurecat Technology Centre in Spain.

The project covers test sites across Europe and brings together local residents, policymakers, businesses and partners from 32 organisations. Its demonstration sites span seven bioclimatic regions, ranging from the Mediterranean to the Arctic.

‘Our digital toolkit and engagement approach will allow people to define the kinds of climate scenarios they are facing, what kinds of adaptive measures they could take – such as limiting agricultural water use or raising flood barriers – and see which steps best help them to adjust,’ said the European Science Communication Institute’s Laura Durnford, who is the project’s spokesperson.

The 600-kilometres-long Catalan coast in north-eastern Spain is one of the demonstration sites. It’s an area that is highly vulnerable to climate change and will require a range of adaptation strategies.

We are connecting diverse data and human activities in new ways to implement climate adaptation measures at a local level.

The local team will map the region’s species, classify them according to their local extinction risk and identify ways to ensure their future. It will also improve the availability of fresh water at campsites and help promote investment decisions in the region.

A key priority for the area is recreating sand dunes and restoring wetlands in response to sea-level rise – a goal that requires Catalan businesses and regional players to forge a shared understanding of the threat and the protection the dunes and wetlands provide. This is challenging because coastal land ownership creates trade-offs, such as the desire for an unobstructed sea view, issues of access and questions over who pays.

‘Climate change poses a clear threat in Catalonia, but while there is goodwill towards adaptation there are also often conflicting interests and economic pressures in taking action,’ said Arpke.

In time, the researchers believe their approach can help communities across Europe and beyond to adapt and thrive.

Back to the future

Meanwhile, back in Athens, ARSINOE is helping to focus minds on the immediate challenge of scorching temperatures.

For a city that last year became the first in Europe to appoint a ‘chief heat officer’, more vegetation is a pressing need. The heat official has warned about Athens becoming uninhabitable as a result of temperature rises. Research has shown that increasing green spaces could help to reduce overall temperatures in cities by up to six degrees Celsius.

ARSINOE is asking Athenians to report local tree cover via a common platform and using virtual reality to showcase the benefits of a greener city. The two technologies increase public awareness about climate adaptation and help researchers get a better understanding of residents’ preferred solutions.

ARSINOE has also teamed up with local schools. Teaching students about climate change’s effects on the environment and society could pave the way for more sustainable consumer behaviour including reductions in energy use and waste – and help children to cope with global warming in the future.

But perhaps the project’s most ambitious initiative is to revive the Hadrian aqueduct, constructed over 15 years beginning in 125 AD.

Until the 1930s, the aqueduct served metropolitan Athens and today still contains water, which, while unsanitised, could be used for irrigation. Pipes are already being built and a water-distribution system is under development.

‘Greening Athens and using water from the Hadrian aqueduct would enhance our resilience in a multifaceted way at the local level,’ said Laspidou. ‘It would involve not only intervening with green spaces and alleviating heat, but also integrating local knowledge, culture and history to promote a distinct sense of identity and community.’

Follow the links to read more about the EU Mission: Adaptation to Climate Change and to explore Horizon Magazine.